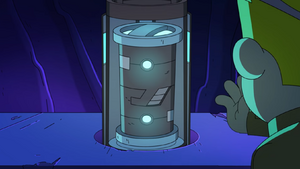 The bombs were build by John Goodspeed; something Sheryl Goodspeed found out when she was spying on him while they were married.

Two of these bombs are known to exist, and both were used to close a breach to Final Space that was threatening to consume Earth. The first by John Goodspeed himself several years before the events of Season 1, and the second by Quinn Ergon in "Chapter 10".

Retrieved from "https://final-space.fandom.com/wiki/Anti-matter_bomb?oldid=15863"
Community content is available under CC-BY-SA unless otherwise noted.