“They would probably be ashamed of what you've become. I've lived in that shame, betrayed the only people that care about me. You don't want it. It destroys every piece of you.”
―Clarence

When first seen in Season 1, Clarence runs a shop on Tera Con Prime selling various "doo-dads", as well as forged identification papers and the skins of dead beings for people to disguise themselves with. He is shown to have a rocky relationship with Avocato, who was hinted to have saved him at some point in the past. When providing Gary and Avocato with papers, he also alerts them about the fact that the Lord Commander is aware of Mooncake being on the Galaxy One.

At the beginning of Season 2, Clarence finds Gary, Little Cato and H.U.E. floating aimlessly in space after the destruction of the Galaxy One and the brutal battle with the forces of the Lord Commander. He saves them, and as such declares them to be his property. It is at this point we learn Clarence has two adopted children: Fox and Ash. He forces Gary, H.U.E., and Little Cato to compete in the Toro Regatta for the Nymerian Cube, and gives them a new ship, the Crimson Light, to do so. Against all odds, they win and the three can thus claim their freedom, but Clarence and his kids decide to tag along since Clarence is unwilling to give up his ship.

Clarence thus joins the heroes in their quest for the Dimensional Keys. Throughout the season, he tries various schemes to make some quick cash, like selling Todd Watson's ship the Happy Place to an unexpected alien, and marrying the Queen of Galang-22, but these all fail. It is also revealed he once bought some defective KVN robots, and that three years ago, he obtained a Dimensional Key for Lord Commander.

Eventually, in "The Set Up", Clarence betrays everybody, including his own children, to side with Sheryl Goodspeed. He steals the Dimensional Keys they had collected, almost killed Fox in the process, and hands the keys over to Sheryl. Too late does he find out Sheryl just manipulated him, and she leaves him empty handed. He attempts to get back with his old crew by telling Gary, Little Cato, and Nightfall where Sheryl was going, but they declare him to be untrustworthy and leave him. He is not seen again for the remainder of season 2.

In "Hyper-Transdimensional Bridge Rising", one month after his exile, Clarence is back in the Interstellar Null Zone, wallowing in shame and completely alone. He is informed by one of his assistant robots that he is receiving an incoming transmission, but Clarence was going to ignore it, until he hears Ash through it. She informs her father that of Fox's death, which brings him to tears. Clarence then listened as she told them that he could help her and the team that's stranded in Final Space by activating the Hyper-Transdimensional Bridge, and the only way he could do so is he had to activate the second bridge on Kalden 1. Although Clarence's robot assistant informs him that the whole galaxy heard the transmission, but he takes off anyways because he felt like he had a purpose. Clarence sets off to activate the bridge, but not before giving up all of his possessions to his assistant robot, calling them "just stuff". When Clarence arrives to Kalden 1, he is confronted by old enemies from Season 2, including Todd H. Watson, the Evil KVNs, the Dewinters, the Queen of Galang-22, and Time Swap Sammy. Fortunately, Fraskenhaur comes to Clarence's aide, fending off most of his enemies. While attempting to activate the bridge, Clarence is mortally wounded by Todd. After Todd himself is mortally wounded by the Mega-KVN, Clarence tries to appeal to Todd's humanity, asking about his family, and wonders how ashamed they would be of the man he is now. Todd ignores Clarence's words and proceeds to wound Clarence once more, before dying as a result of his own injuries. Clinging onto life, Clarence activates the bridge, giving the Team Squad a way out of Final Space. Knowing that he redeemed himself, Clarence comforts himself by watching a video of his adoptive family as he succumbs to his wounds.

Clarence's usual form is a small, gray alien with thin, black hairs along his face, either a mustache or a pair of wrinkles, and a very fat chin. His eyes are never seen as he wears a pair of green goggles with orange lenses on his face. His outfit consists of a dark teal shirt with a single stitch on it and a light collar and sleeves. He also wears a pair of maroon trousers, a green utility bag, and black bandages for boots. In "The Lost Spy", it is revealed that Clarence has four nipples. In "Hyper-Transdimensional Bridge Rising", Clarence is depicted with a beard following his exile from the Team Squad, and his clothes are much more ragged than they were in Season 2.

In "The Set Up", Clarence is revealed to have multiple forms, such as a snake-rat hybrid and a large, wasp-like alien. These are all skin-suits however, and he can shed them at will. While wearing them, he can use the abilities of the aliens these skins originally belonged to, like flying. 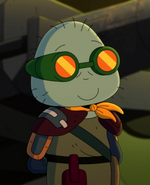 Insectile alien
Add a photo to this gallery

Clarence is a very geeky, yet passive-aggressive fellow, who seems to act rather rude with people who act aggressive toward him, such as when Avocato picks him up by his neck and demands for Gary to get papers. He is also shown to think lesser of humans, to the point of treating them like slaves, as he tells Gary that he can touch him any time he wants. Being a businessman, he is incredibly obsessed with money and will go to any extreme (from attempting to sell The Happy Place to marrying the queen of Galang-22) in order to achieve it.

Clarence is also deeply selfish as he is willing to cheat numerous people out of money, made up the Carnivolo holiday so he could make people lavish praise on him, and stole the dimensional keys and betrayed his own adopted children just so he could be with Sheryl. He is also somewhat perverted as he had a one sided attraction to Sheryl to the point where he attempted to get her into bed with him by stripping down into a red thong and a fur robe. He also takes immense sexual pleasure in both whipping people and being whipped himself as he was revealed to own a rack of whips and got highly aroused when he joined the crew in whipping Avocato in a misguided attempt to get him to recover his memories.

Clarence's relationship with Avocato seems rather rocky as both seem to hate each other to varying degrees, with Avocato hating Clarence the most, while Clarence just seems mildly peeved at Avocato.

Clarence, while not stated to dislike Gary, does think of him as a lesser, almost like an animal. Gary also makes cracks at Clarence similar to how he does to Gary.

Clarence adopted Fox sometime before he adopted Ash. Although he was never the best parent, frequently using Fox and Ash to steal valuables, con people, and acting rather passive aggressive towards Fox when he didn't lavish praise on him during Carnovolo, he genuinely grew to love Fox as his son. In "The Set Up", Clarence mortally injures Fox by tasing him in order to escape with the Dimensional Keys, resulting in Fox becoming mortally wounded. However, it is later found out that Clarence didn't mean to nearly kill Fox and reacted with horror when Gary informed him that Fox almost died. In "Hyper-Transdimensional Bridge Rising", Clarence was devastated upon learning about Fox's death, presumably blaming himself for the death of his adopted son. Clarence spent his final moments looking at a holographic picture of himself, Fox, and Ash, smiling as he passed from his injuries.

Clarence took Ash under his wing at some point following her family's demise and treats her like a daughter. Similarly to Fox, Clarence grew to love Ash as his daughter, although he is not always the best parent and reacted angrily when she didn't praise him during Carnovolo. In "Hyper-Transdimensional Bridge Rising", when Ash informed Clarence of the Team Squad being trapped within Final Space, he set off to Kalden 1 to go save them, making it clear he was only doing so to give Ash a way out. After being fatally shot by Todd H. Watson, Clarence spent his final moments looking at a picture of himself, Fox, and Ash during happier times, smiling and laughing as he passed.

Clarence is acquainted with Sheryl and was more than willing to betray his family and friends in order to help her. After handing over the dimensional keys, however, he begged to join her out of love for her, but she refused.

Retrieved from "https://final-space.fandom.com/wiki/Clarence?oldid=16761"
Community content is available under CC-BY-SA unless otherwise noted.