The Dimensional Keys are 5 objects that are hidden all across the universe. They are first mentioned in Season Two. Getting all five of them can break through Bolo's prison, and eventually open Final Space. Finding all five of them is the main goal fo the Team Squad throughout Season 2.

The Crimson Light Crew steals The Nymerian Cube, the first Dimensional Key, from Rug Yorkvain, the pilot of a Starchaser. Later in the episode, Bolo shows up to tell the crew about the keys and what they are.

The crew discovers that the second Dimensional Key is on Serepentis, due to the tattoo that Ash has. They go inside Werthrent, a snake creature's, mouth to get it.

Gary’s mom, Sheryl Goodspeed, convinces her son and his friends to help her steal a "family heirloom", a jewel, from the Polyhedron Fortress. The jewel was supposedly stolen from the real owner, and she claimed they were going to steal it back. Once they had it however, it was revealed that the jewel was actually the container of a Dimensional Key, and she took it with her as she left the ship.

Once Mooncake is taken by the Arachnitects, the crew goes around the universe trying to find someone who can open one of the keys; because opening it will let them go for Mooncake. Along the way it almost gets swallowed and melted while trying to open it, but Dartrichio and KVN manage to open it and create a portal to the dimension of the Arachnitects.

When the crew ends up traveling three years to the past at Tera Con Prime, Clarence reveals that at that time he got a Dimensional Key for Lord Commander. They then decide to steal the Key from the past, however, Time Swap Sammy appears demanding that it be returned so as not to alter the existence structure. Gary ends up accepting on condition that he tell them how to save Avocato.

Sheryl goes to Tera Con Prime in the present, finding the Dimensional Key that had been left behind, adding it to her possession. She then communicates secretly with Clarence, convincing him to betray the crew and bring her the Dimensional Keys they had. Even so, Sheryl takes the keys and rejects him coldly. She then leaves to Rugaro in search of the last Dimensional Key.

The crew follows Sheryl to Rugaro, a planet that was being sucked into the Dark Zone. While Gary and Nightfall go for the fifth key, the rest infiltrates Todd Watson's ship to retrieve the other four. The guardians of the fifth key try to protect it by throwing it into space, but Sheryl kills the leader and takes it without listening to his warning that the power of the key would lead the planet to its destruction. Gary manages to take the key fom her and H.U.E manages to recover it from the lava. The rest of the crew successfully recovers the other keys, thus gathering all five.

Upon meeting Bolo in Inner Space, he reveals that to use the Dimensional Keys and release him through the power of Mooncake, a "sixth key" is required, the life of someone who sacrifices himself to open the way to Final Space. Nightfall decides to become that sixth key.

The keys were presumably destroyed when Bolo was freed. 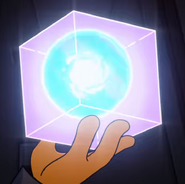 The fifth key
Add a photo to this gallery
Retrieved from "https://final-space.fandom.com/wiki/Dimensional_Keys?oldid=10231"
Community content is available under CC-BY-SA unless otherwise noted.