The end of the universe

“I am the shadow cast, and the light beyond. Your very breath and the choices you make are my gifts. I am in all life.”
―Invictus

It is a malevolent cosmic entity that resides in Final Space, and is the leader and corrupting influence behind the Titans and the Lord Commander. Invictus is the true antagonist of Final Space, although it doesn't play a central role in the series until Season 2 premiere, "The Toro Regatta".

Invictus is a mysterious but purely evil entity. It is unknown how Invictus came to be or where they came from but it is revealed that they desire nothing but destruction and chaos. The being was mentioned by Nightfall in "The Toro Regatta". When she kills the Lord Commander, telling him that she has killed him in several different timelines and every time she killed him, Invictus always takes him and the cycle begins again. This combined with the fact that the Lord Commander’s corpse disappears after a mysterious and sinister voice was heard, strongly implies that Invictus was responsible for corrupting the Lord Commander when he was still Jack after John Goodspeed sacrifices his life to close a breach.

The backstory of Invictus is further revealed in the episode "The Arachnitects". A race of god like machines called the Arachnitects reveal to Gary Goodspeed that they were the ones who created the Titans under the orders of higher gods to assist with the construction and layering of dimensions. Unfortunately, the Arachnitects and the Titans reached the darkest depths where Invictus lurked. With wicked intentions, Invictus used their powers to manipulate the Titans into betraying their creators and serve them. Only one Titan, Bolo, was able to resist Invictus’ corruptive temptations and a war ensued between the Arachnitects and Invictus. In that war, The Arachnitects and Bolo realized that they were somehow unable to defeat Invictus, resulting in Bolo making the decision to sacrifice himself, allowing Invictus and the corrupted Titans to imprison him in a dimensional cube in Inner Space. This gave the Arachnitects the opportunity to seal the Titans and Invictus in Final Space. However, Invictus and their minions were far from finished and spent the next ten thousand years attempting to break through the seals that kept them in Final Space and destroy the universe in the process. In doing so, they caused additional breaches in specs that kept being closed off, one of which resulted in the creation of Mooncake after a particle of Final Space fused with the blast radius of an antimatter bomb detonated by John Goodspeed, resulting in the deal that separated Invictus from the universe to significantly weaken due to the fact that part of the seal that kept Invictus in was inadvertently used to create Mooncake.

In "The Closer You Get", Gary is told of a way he could communicate with Quinn by Avocato who was slowly recovering his memories. In order to get to Final Space, Gary consumes liquid space-time in Kanopus Prime and reunites with Quinn. However, Invictus is revealed to have been keeping Quinn as their hostage and takes possession of Gary's body. They then try to kill Avocato and Little Cato through their new vessel, but opts to take Avocato when they sensed that he was stronger. They tempt Avocato with the notion that Gary stole Little Cato from him, and they seemingly mortally wound Gary. Being forced to shoot him, Invictus has Avocato disown his son, and vanishes.

It returns in "The Sixth Key", still possessing Avocato. It tries to prevent the crew from freeing Bolo. After chasing them in a ship, it takes one the entire crew and easily overpowers them. As Avocato begins to strangle his son, Ash Graven, with inspiration from the very recent sacrifice of Nightfall, uses her powers in a massive blast that forces Invictus out of Avocato's body, finally freeing him from Invicus’s possession.

It is unseen, but its eyes, smile and horns are faded.

Its true form (as shown when Ash is taken inside its prison) resembles a massive eye with a pitch black pupil.

Not much is known about Invictus, but they are revealed to be a purely evil god who desires nothing but destruction and death. Invictus is a cruel, arrogant, and manipulative deity as they corrupted the Titans, caused Jack to become the Lord Commander, and cruelly imprisoned Bolo when he refused to serve Invictus.

It is shown that Invictus has a strange but malevolent obsession with Mooncake, apparently seeing him as a tool for them to use to break through their seal. It is strongly implied that they were the one who told Lord Commander to capture Mooncake and use him to break the seal, promising to make him a Titan as a reward. However, Invictus is implied to be deceitful as when the Lord Commander used Mooncake to break the seal into Final Space, Invictus and their forces did not take him into their realm, but took Earth instead. 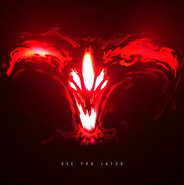 Invictus in the Season 3 teaser 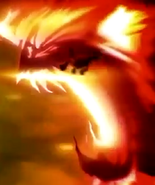 Add a photo to this gallery
Retrieved from "https://final-space.fandom.com/wiki/Invictus?oldid=14941"
Community content is available under CC-BY-SA unless otherwise noted.