“My dad taught me a trick. He said, if you don't know what to do, find the least trustworthy person you know and do the exact opposite.”
―Little Cato

Little Cato is one of the two tritagonists (alongside Avocato) of Final Space. He is a 14-year old Ventrexian, and the adoptive son of Avocato and Gary Goodspeed.

Little Cato was born to the King and Queen of Ventrexia. While the king and queen were evacuating following an attack, their ship was shot down and destroyed by Avocato, a Ventrexian general, under the orders of the Lord Commander. Little Cato miraculously survived the destruction, and was found by Avocato shortly afterward. Reminded of his previous son, Avocato swore to protect the child and adopted him. That was when Lord Commander arrived, asking what Avocato was doing with the child. Lying to his master, Avocato said that he found the baby, saying that he was his child now. Lord Commander then warned Avocato that his child would soon be the death of him.

Three years prior to the events of Season 1, the Lord Commander tested the loyalty of his generals, of which Avocato was one, by ordering them to kill their first born children. Avocato was the only one who refused. The Lord Commander thus stripped Avocato of his rank and made him a bounty hunter. He also took Little Cato hostage to ensure Avocato would do as instructed.

Separated from his father for years, Little Cato was determined to be reunited with his father.

In "Chapter 2", Avocato discovered Little Cato's location on Tera Con Prime from Terk, and attempted to free his son, but it was a trap and Avocato was captured instead. After Avocato and Gary Goodspeed escaped, the Lord Commander had Little Cato transferred to his prison on Zetakron Alpha.

Even in this new prison, Little Cato remained defiant towards the Lord Commander. He received unexpected help when a mysterious ally snuck a handheld computer into his cell, and through it helped him escape so he could get to the prisons' transmitter and send a distress call to Avocato. Too late did Little Cato find out that his ally was actually the Lord Commander, and he had just helped the tyrant set a trap for Avocato and Mooncake.

Lord Commander then placed Little Cato under mind control, and when Avocato and Gary showed up on Zetakron Alpha, he had Little Cato attack his father. Avocato was able to break the Lord Commander's control, and thus father and son where reunited. Joy was shortlived however when, during their escape, Lord Commander placed a bomb on Little Cato's back, and Avocato had to sacrifice himself to save the others from the explosion.

Thorn by grief, Little Cato, assisted by Gary, Mooncake and KVN, foolishly tried to avenge his father by taking an F71 Hawk and attack a Heavy Incinerator with it. It was only thanks to Nightfall that they survived, but Little Cato was injured and needed medical attention. When he learned Nightfall was from the future, and her ship was a time machine, he and KVN tried to steal it to go back in time and save Avocato. Instead, they activated the self-destruct mechanism. The two were saved in time, but the ship was destroyed.

In "The Toro Regatta", it was revealed that Little Cato, like Gary and KVN, had been picked up by Clarence, and thus became his property. Clarence made Little Cato into a washboy.

This rather degrading job would not be kept for long though, as Little Cato would soon be reunited with Gary, H.U.E., and the rebuilt KVN, as well as Clarence's adopted children Fox and Ash Graven. It can be noted that he held an especially large resentment to Fox, due to an apparent hundred-year war that their species' had long ago. Together, they'd compete in the Toro Regatta, a death race, during which they helped Clarence steal the Nymerian Cube. After winning the race, the group would encounter Bolo, who instructed them to find the Dimensional Keys to free him. Joined by Nightfall and Mooncake, and with a new ship, the Crimson Light, the crew thus went on this new mission.

For the remainder of the season, Little Cato would be a vital member of the crew of the Crimson Light. He went through his fair share of traumas alongside his friends, however, including being trapped in a time shard for 60 years (while the rest of his friends were only trapped for a few minutes), and going back in time to save Avocato from his demise, only to lose him a second time at the hands of Invictus, an act that forced Little Cato to shoot his own father and accept that his father was gone, believing that he'd killed him.

After this, Little Cato attempted to go his own way for a while but would be convinced by Gary to return with him with the offer of adopting him, an offer he was more than happy to accept. Little Cato would also help Gary in his attempt to recover the stolen Keys from Clarence, and was present when Gary abandoned him.

Once the keys were recovered from the ship of Todd Watson, and Gary's mother Sheryl was finally imprisoned, Little Cato remained present with the rest of the crew as they travelled to finally free Bolo. Their challenges weren't finished yet, however, as Avocato, still alive and still possessed by Invictus, attempted to stop them. Thanks to Ash, he's been freed, however, and would reunite with his son after months of separation, leaving Little Cato overjoyed that he now had both of his fathers back into his life.

Little Cato has smooth, sunburst orange fur with a cyan-turquoise blue mohawk, with a brown marking that leads down halfway down his forehead in an arrow shape. He wears a bright yellow sleeveless shirt with a high collar, that is similar to what appears to be a turtleneck. He wears a medium grey skirt, a dark grey strap against his chest, wrist gauntlets and belt, gray belt with a black buckle, that is similar to the seatbelt, as well as grey boots that can go up to his knees and grey leggings.

In "Chapter 7" of season one, Little Cato was briefly seen grown-up while trapped in Nightfall's ship, where his appearance was mostly the same, only he was older and had silver shoulder and knee pads; he also had a shorter mohawk. 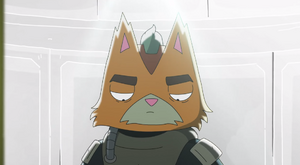 In the season 2 episode "The Other Side", Little Cato, due to the effects of the time shard, was seen to be much older than before. He now had slightly darker and messier fur, and his mohawk was now slicked back. He wore a thick set of torso armor, including a chest plate, gauntlets, and built-in shoulder pads. He also had a yellow skirt, and steel knee-high boots. Thanks to Gary and the others rescuing him, he returned to his proper age and has since returned to his normal look.

Despite his young age (or just because of that), he is brave and rebellious. He is determined to reunite with his father after all these years. Like Avocato, he can be serious and threatening (but in a less lethal way). He also makes a smart impression and does his best to cause problems for the Lord Commander.

Little Cato seems to be really bored in his captivity. In Chapter 3 he shows a little beatboxing skill. He also seems to be familiar with universal communication devices and advanced technology, as he was able to hack his way out of the prison cell. He even declared at one point that he was better at hacking than his father.

He only smiles when he can make fun of the Lord Commander. Little Cato doesn't seem to worry about being killed by him. (In Chapter 2 he seems more worried about his father than about himself).

In season 2, he started to become for laidback and actually enjoying doing fun stuff with Gary like dancing to Footloose. It also shows the kind of have a big ego when Clarence challenges them to a game of thimbles, Little Cato brags how he is Ventrexia's Thimbles Elite Junior Champion. He was also shown to be somewhat flustered when Ash thanked him.

Avocato is Little Cato's father, who he loves and admires, but when his father became the Commander's second in command, a master of a murderer, he became scared. But when Avocato was assigned to kill his son as allegiance he couldn't do it. Little Cato's father was a warrior and he respected it. Although in "The Ventrexian", it was revealed that Little Cato was born in royal blood and Avocato killed his parents when he was a baby because of an order from Lord Commander. After Avocato found the baby Little Cato, he adopted him.

After Avocato died in chapter six Avocato trusted Gary, his best friend to watch over his son knowing that he is a good honest man that he can trust. But Little Cato was going through so much grief and anger that he couldn’t do anything but hide. Gary wanted to help so what he did all he can to make him happy, which included doing something irrational. But at the end when Cato still felt alone, Gary assured him that he was not alone and that they will get through it together. After this, their friendship grew Gary treated Little Cato as an equal instead of just a child, and showed how much does he believe in him. And Little Cato appreciated Gary for it that he started to see Gary in a new light. In season two they showed to be very close friends, even shedding a tear for when he saw Gary again, he was very happy to see him. They stuck together through the worse and became stronger. While his biological father inspired him to be strong, Gary let him be a kid as well getting him to laugh and have fun. But when hard times came Gary tries to be better for him to make sure that he was loved and not alone for that he adopted him, but Gary let  Little Cato decide if he was ok with it. And Little Cato was happy to accept it.

Little Cato used to be somewhat scared of Ash, and does his best to avoid trying to anger her, but he does seem to care about as shown when he rescued her while escaping the Happy Place and staying behind in Werthrent to help her. While Ash also seems to care about Little Cato despite the fact that, she sometimes treated him like a pet and was possessive of him. She appeared to be sad when he offered to take his father's place in the past, as well when he was trapped on the Other side of the time shard.

Little Cato and Fox are initially shown to have a mutual animosity towards each other. Fox initially dislikes Little Cato because his people, the Tryvuulians, have had a long-lasting blood-feud with Ventrexians. Despite their dislike of each other, the two share a room in the Crimson Light, where they often bicker and fight with each other. However, despite their rivalry there have been times where the two have bonded. In "The First Time They Met", Fox saved Little Cato from being sucked out of the airlock of the Crimson Light. Although Little Cato insisted that Fox saving him changed nothing between them, the two shared a smile afterward. There are still moments of tension between the two despite this; In "Descent into Darkness", Fox threatened to kill Little Cato if he let anything happen to Ash on their mission, although Little Cato actually respected this rather than get offended by it.

Retrieved from "https://final-space.fandom.com/wiki/Little_Cato?oldid=14897"
Community content is available under CC-BY-SA unless otherwise noted.