None (referred to as male)

Mooncake was a planet-destroying spatial anomaly who was created by the residual energy of an anti-matter bomb explosion that closed a portal to Final Space. Shortly after, he was first discovered near a supernova aboard the Scarlet Lance, which he soon fled from and met Gary Goodspeed, a prisoner held alone on the Galaxy One, who named Mooncake after a caterpillar he once had as a child. With the two quickly becoming close allies, Mooncake joins Gary (and the soon expanding Team Squad) in order to save the universe from the Titans, the Lord Commander, and Invictus, who seek to use Mooncake in order to gain even more power and lay waste to the universe.

Mooncake was created several years before the events of the series, when John Goodspeed used an Anti-matter bomb to close a breach to Final Space.

In the years afterwards, Mooncake became a target for the Lord Commander, who wished to harness his powers to open a gate to Final Space. At some point, Mooncake was found by the crew of the spaceship Scarlet Lance, but the Lord Commander attacked this ship to get to Mooncake, killing the entire crew. Mooncake was eventually taken prisoner by the Lord Commander, and brought to his treasure house Tera Con Prime, but was set free by a time-travelling Gary Goodspeed, who instructed Mooncake to go and find him.[2]

In "Chapter 1", Mooncake runs into Gary, who at the time is a prisoner serving a five year sentence on the Galaxy One. Gary takes Mooncake on board, against H.U.E.'s orders, and quickly grows to like the little green alien. Shortly afterwards, the ship is attacked by Ventrexian bounty hunters looking for Mooncake, but they are all defeated except for Avocato, who reluctantly joins Gary and warns him of Mooncake's true powers, but Gary doesn't believe him.

Having Mooncake on board makes the Galaxy One a new target for the Lord Commander. In "Chapter 3", Avocato and Gary decide to hide Mooncake with The Order of the Twelve on Yarno, but find out too late that the order is working for the Lord Commander. Mooncake ends up in Deathcropolis and fights off all the other creatures. Gary thus discovers Mooncake is indeed as powerful as Avocato claims him to be, but assures Mooncake this won't change anything between them.

In "Chapter 6", Mooncake participates in the rescue of Little Cato from Zetakron Alpha. He takes out the guards attacking Gary, Little Cato and Avocato.

In "Chapter 7", Nightfall reveals that in the bad future she came from, Gary was killed by the Lord Commander, after which Mooncake wend mad with grief and destroyed countless planets, accidentally opening a rift to Final Space and unleashing the Titans. She tries to kill Mooncake to keep this from happening, but Gary convinces her to give Mooncake another chance.

In "Chapter 9", Mooncake goes to Earth with the Team Squad to find a second anti-matter bomb to close another breach to Final Space. He plays an important role in rescuing Quinn Ergon when she is knocked unconscious while under water. In "Chapter 10", while defending the Galaxy One against the Hives, Mooncake is captures again by the Lord Commander. He brings Mooncake on board of his ship, attaches him to a machine called the dimension splitter, and forces Mooncake to further open the second breach. This allows a Titan to reach out and pull all of Earth into Final Space before Quinn closes the breach.

In "The Toro Regatta", Mooncake is rescued from the Lord Commander's ship by Nightfall, but the dimension splitter has drained him of his powers. He remains powerless until the episode "The Arachnitects".

That same episode, it is revealed that Mooncake's creation weakened Final Space, since Mooncake was made of final space. The Arachnitects stated that this caused an imbalance in the universe and weakened the walls of final space, and needed to return mooncake back to where he came from to seal the tear. Just in time, mooncake's powers return to him and he is able to re-seal the breach himself. Gary then convinces the Arachnitects to let Mooncake stay with him, and that they will come if his powers are needed again to close Final Space.

At the begin of the series, Mooncake is, as he got a design is incredibly simple in appearance, a cute, small alien. He completely lacks the entire parts, such.as his nose, torso, arms and legs. He has a green skin, two round eyes and a opened/closed mouth. His body is oval shaped, with two stubby appendages and antenna with spherical tips.

Mooncake is friendly and affectionate, especially towards Gary.

He is also a powerful "planet destroyer", who feels incredible guilty because of this. Mooncake is attached to Gary since he seems to be the very first life form he has met that is okay with who Mooncake is. Mooncake dislikes the Lord Commander and his intentions on keeping himself alive by exploiting Mooncake as the key to opening Final Space and becoming a titan.

More in season two, Mooncake has shown degrees of intelligence, enough to play a chess-like game with Clarence at the end of "The Arachnitects". 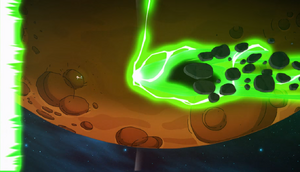 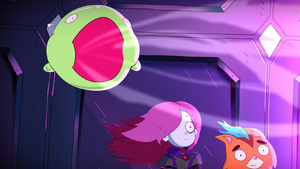 Mooncake can fire large green antimatter blasts from his body, capable of destroying nearly everything that they touch, including planets. He can increase or decrease the power of these blasts at will.

Since he himself is composed of the essence of Final Space, his power is a key capable of opening the entrance to Final Space.

He can levitate his body unaided, and fly incredibly fast through space or under water, even with Gary and Avocato in tow. He doesn't seem to need any oxygen to survive, considering he can remain unharmed in space and under water without protective gear. He also appears to be resistant to extreme temperatures, being able to withstand the full heat of an imploding star.

Mooncake has a rubber-like skin that allows him to bounce off surfaces.

Mooncake is very intelligent, and appears to be able to understand English and emotions.

It is revealed in "The Toro Regatta" that Mooncake's energy powers have been completely drained by the Lord Commander's death ray. In "The Arachnitects", his powers are restored when he rescues Gary and seals the breach in Final Space, preventing Invictus from escaping.

In "Descent Into Darkness" he shows the capacity to create a vacuum to eat things, using this ability to save KVN. 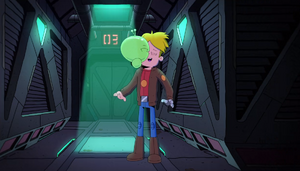 Mooncake found Gary by flying into him from an unknown location, possibly from the Lord Commander chasing him. Both share a connection and have a common goal, with Gary choosing to see the good in Mooncake rather than his destructive potential. Mooncake is very friendly towards Gary, and Gary is very loyal to Mooncake. Gary would do anything to protect Mooncake, and Mooncake often puts himself at risk to save Gary.

In "The Notorious Mrs. Goodspeed" Mooncake is shown to quickly get jealous of Sheryl Goodspeed, as Gary is now spending time with his estranged mother. As a result, he takes to eating almost anything he can find, though this is quickly resolved by the end of the episode.

Avocato has been looking for Mooncake all over the galaxy to hand over to Lord Commander. However, after playing cards with Gary, he warms up to Mooncake and even trusts him, as shown when Avocato was shrunk from his normal size in chapter 5. Mooncake trusts Avocato, and even allowed him to ride on his back.

Mooncake appears to be more lenient and friendly towards KVN out of most people within the Galaxy One crew, though he does occasionally appear annoyed by KVN. He and KVN tend to be paired in some of the most dire of situations in the show, whether it'd be forced or a choice.

The Lord Commander views Mooncake as nothing more than a means to an end and seeks to use his immense power to reach Final Space. Mooncake shows intense dislike towards him, and also fear.

During chapter 7, when Nightfall had short meetings with Mooncake earlier in the season, she tries to kill him in hopes of saving the timeline, but is ultimately stopped by Gary. Mooncake seems to bear no ill will towards her for this, and even flies over to her in "The Toro Regatta" after meeting with her again. During season two it can be assumed that they grew close, close enough for him to cry before sacrificing her according to her wishes so Bolo would be freed in "The Sixth Key".

Retrieved from "https://final-space.fandom.com/wiki/Mooncake?oldid=16772"
Community content is available under CC-BY-SA unless otherwise noted.