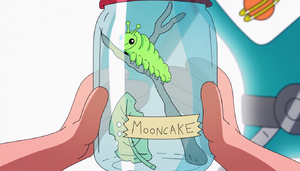 Mooncake is a caterpillar who was Gary Goodspeed's pet during his childhood.

Gary kept him even after he turned into a butterfly.

Mooncake was a present to Gary from his father, John Goodspeed. The caterpillar stayed with Gary after his father died, and Gary took Mooncake with him wherever he went, including to John's funeral. Around the time Gary's mom, Sheryl Goodspeed, decided to walk out on Gary, Mooncake had entered his stage as a chrysalis, from which he eventually emerged as a butterfly.

Gary lost Mooncake when a couple of teenagers, who were bullying Gary, smashed the jar on the ground, breaking it. The impact seemingly killed Mooncake, though it is also possible he escaped afterwards. Either way, Mooncake was gone from Gary's life.

Years later, Gary would name the alien creature Mooncake after his childhood pet.

Retrieved from "https://final-space.fandom.com/wiki/Mooncake_(caterpillar)?oldid=14166"
Community content is available under CC-BY-SA unless otherwise noted.