Start a Wiki
This article is about the TBS Series species. You may be looking for the pilot species.

The Temporal Worms, also called Time Worms by Little Cato, are a race of space creatures that can move through time, being able to take someone to the distant or near past or future.

Temporal Worms are creatures that act as a large interdimensional wormhole portal. It allows beings and objects to travel through time and space by entering its mouth. Users of this portal have no control over what time period or location they will end up in.

They inhabit space, moving through spacetime. Their eggs look like normal asteroids that are drifted in space until they hatch.

In "Chapter 3", a Temporal Worm devour the Galaxy One while this was fleeing from the Lord Commander's fleet. The Worm send the ship four days to the future.

In "The Remembered", the Crimson Light's crew breaks into a nest of Temporal Worms hatching from their eggs. One of them devours the ship and send it three years to the past in Tera Con Prime. The crew take another Temporal Worm to go back, and Time Swap Sammy momentary diverts its course to the moment of Avocato's death in order to save him. 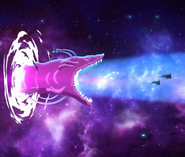 Temporal Worm egg, hatching.
Add a photo to this gallery
Retrieved from "https://final-space.fandom.com/wiki/Temporal_Worm?oldid=10531"
Community content is available under CC-BY-SA unless otherwise noted.